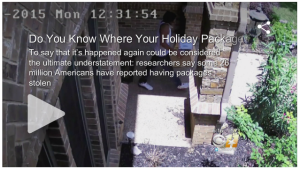 To say that it’s happened again could be considered the ultimate understatement: researchers say some 26 million Americans have reported having packages stolen. And quite often, surveillance cameras capture the thieves in the act.

The Flower Mound mom just had a system installed, after considering it for years. And the holiday packages aren’t her top concern. She says the cameras will do more than capture crimes: they’re already delivering peace of mind.

“I’m a busy parent,” says Evers, “it’s nice to know that if I need to take a look– I get these alerts: a door’s been opened, a door’s been locked, so it gives me peace of mind with my children.”

“The HD cameras now, compared to the old analog cameras, where if they blow up the pictures they would be grainy, now with the high definition, they (police) can actually take facial shots over toFBIequipment

and do facial recognition,” says Colby Murphy with Milestone Security. “Just by a simple video we can put bad guys in jail.”

Murphy says homeowners considering surveillance systems should do their homework first—consider how many cameras are needed and the hardware required to catalog the video. “You don’t want to have eight cameras, and a hard drive that can only hold one day’s video,” says Murphy.

With the help of an app, the flexible, mobile systems allow homeowners to access live cameras anytime, anywhere… keeping an unblinking eye on their homes.

“Yes, there’s the tangible aspect being able to look—look at the screen,” says Evers. But, the intangible is how it makes me feel about the safety of my family. With three active kids, people coming in and out of our neighborhood all the time, my husband and I coming in and out of the house … you just never know… the peace of mind, it’s invaluable to me.”